Firefighters were able to safely recover the remains of two adults and one child.

“This was an absolutely heartbreaking task for all involved,” Tukwila Police said. “Our hearts go out to the friends and family of those whose lives were lost and to all of the individuals and families who were displaced by the fire.”

A massive thank you to all of our regional fire partners who responded to assist the Tukwila Fire Department with this incident. Also thank you to the Red Cross, Tukwila Food Pantry, the Tukwila Children’s Foundation and countless members of the community who stepped forward to offer assistance and organize donations, housing and other necessities for families impacted by the fire.

Firefighters and officers are still actively working the scene and will be working the scene for the foreseeable future. The hillside behind the apartments is being evaluated by subject matter experts. Interurban Ave S will be closed until tomorrow morning at which times will be able to safely clear debris and re-examine the area.

Firefighters responded to the first call around 5 a.m., and found the structure fully engulfed in flames.

The blaze impacted 32 apartment units, and many displaced residents are now getting help at the Tukwila Community Center and from Red Cross.

Parts of the structure were still burning nearly five hours later, and portions of the roof have begun to collapse.

Firefighters still have not had full access to search the building.

Evacuations have been ordered for the 15900 block of Interurban Ave S. due to the risk of landslide at the fire scene. Police are also evacuating the A and B buildings at 15130 65th Ave S.

Cause of the fire remains unknown at this time.

Five people who were initially unaccounted for have since been found safe, authorities said. 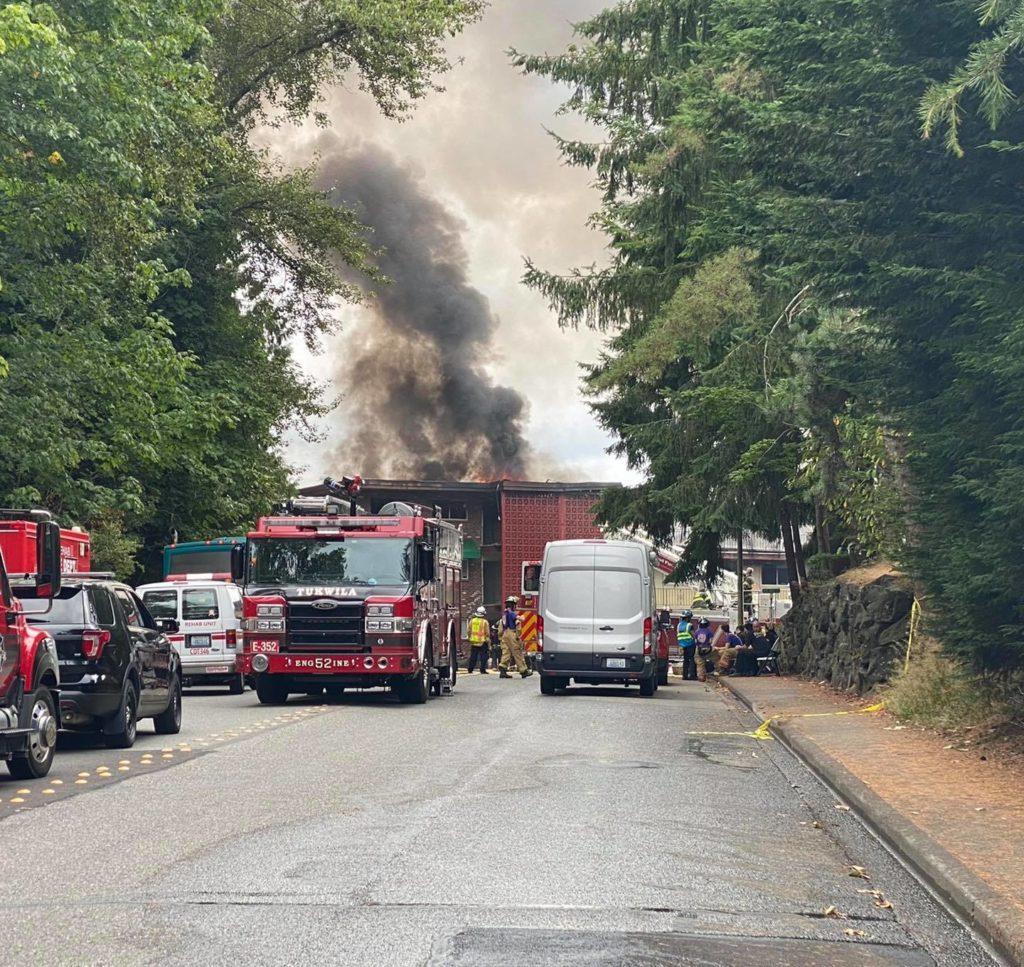 Update: This fire is confirmed to be a fatality. 1 adult and 1 child confirmed deceased. 5 others that were previously reported as unaccounted for have been located and safe. We still have not had full access to search the building. Portions of the roof have begun to collapse. pic.twitter.com/mQrtXL1kIt

Crews from South King Fire and Rescue are assisting in this devastating fire. Please avoid the area. https://t.co/o5HiMbMBE7

Evacuations have been ordered for the 15900 of Interurban Ave S fire to risk of landslide at the fire scene. Business are being contacted by @TukwilaPD. pic.twitter.com/LkbXqCmJ21

Current conditions below the fire scene on Interurban. Please stay out of the area. Interurban is closed between Fort Dent Way and South 144th St. Structural engineers are meeting with command staff now. pic.twitter.com/jYFUw9PJCF

Interurban Ave S will be closed until tomorrow morning. Crews will be clearing debris and re-examine the area at that time to make a determination as to whether or not it can safely be reopen.

Next press conference will be at 2pm at the fire scene on the south side of the fire. Current fire conditions: pic.twitter.com/LT5nbFsfh2

Sad update to #breaking news we brought you this morning.
An adult and child have died after the (3) alarm fire in Tukwila at the Maple Crest Apartments.
5 people who were originally unaccounted for — have been found.https://t.co/oGjDcnAEOw#KOMONews pic.twitter.com/bw58lOyUOx

Officers are evacuating the A and B buildings at 15130 65th Ave S in relation to firefighting efforts in the 15100 blk. If you reside in either of these buildings, please leave your residence and proceed to 65th Ave S. pic.twitter.com/CI21otTMuR