From our sister site The Waterland Blog:

On Aug. 8, 2022, Partner/General Manager Ben Anderson was generous enough to give us a personal tour of the under-construction Des Moines Theater.

Construction work is ongoing on the site, with workers buzzing around like busy bees all over the growing, impressive five-story structure.

Anderson told The Waterland Blog that he hopes to open the theater sometime in the first quarter of 2023.

Some new info gleaned from his tour:

If you appreciate our independent local journalism, please… 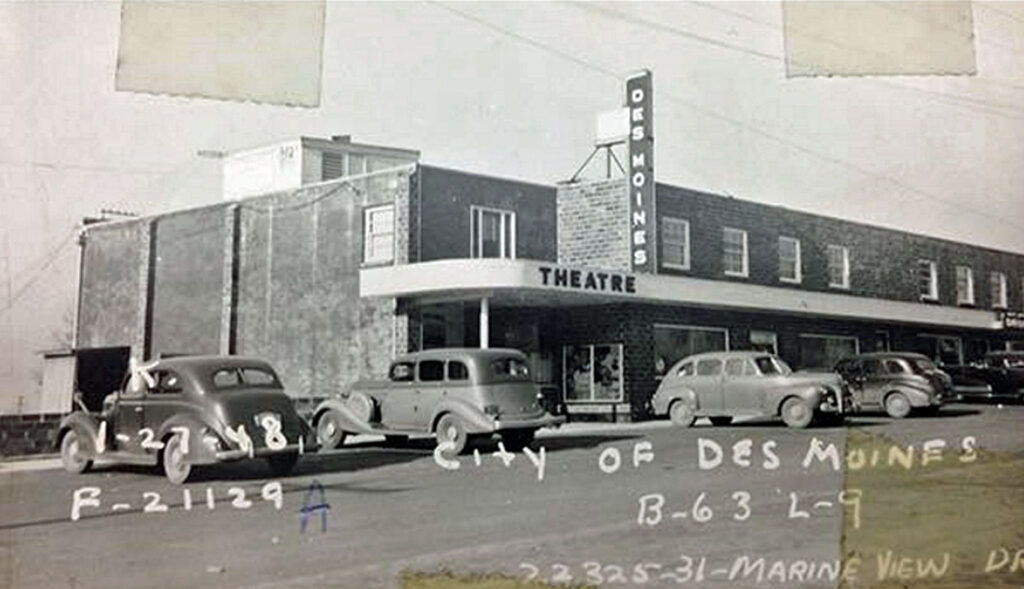 The theater was originally opened in March, 1947 by Delbert and Wally Osterhoudt to house a 400-seat cinema, retail stores, and office spaces.

Wally Osterhoudt served on the Des Moines City Council and was mayor from 1964-69. On the second floor Dr. Frank Underhill and Dr. Youker had offices. The building also housed Dee’s Mart, and the Des Moines Drugstore for a while in the Northeast corner.

Over the years the theater has changed hands and had been closed entirely before being purchased in 2015 for $430,000 by Spokane-based Dan Spalding. The current rebuild/renovation is being managed by Anderson and Jefferson Angell.

In 1973, it was sold and changed from running family-oriented films to showing “adult” movies. Local groups picketed the theater in the 1970s, and in the 1980s the city even took legal action.

In the 1990s the theater reopened under new management and reverted to showing family-oriented films and again is a community asset. It featured 1940s decor, snack bar, a stage, and with second run movies affordable prices for the residents of Des Moines. The Cinema is a good place for old fashioned family entertainment and is conveniently situated on Marine View Drive walking distance from several dining establishments. One will notice that “Wild in the Country”, featuring Elvis Presley, and “Days of Thrills and Laughter” are playing at the old cinema.

“The mission of The Des Moines Theater is to provide a home for the arts and gathering place for the community of Des Moines and South King County, through the presentation of events, development of education programs and maintenance of the performance spaces of the theater venue,” their website says.

The team is determined to maintain this building’s charm, character and history while at the same time adding 18 residential units above and behind the Theater. Each unit will have its own deck with stunning panoramic views of the Puget Sound and Mt. Ranier, food access, high quality modern finishes and fixtures, as well as walkable access to the Marina, miles of trails, many restaurants and the Angle Lake light rail station.

“It is our goal to return the theater to an operating movie theater as well as a performing arts center for live music, plays as well making it available for community and private events.”