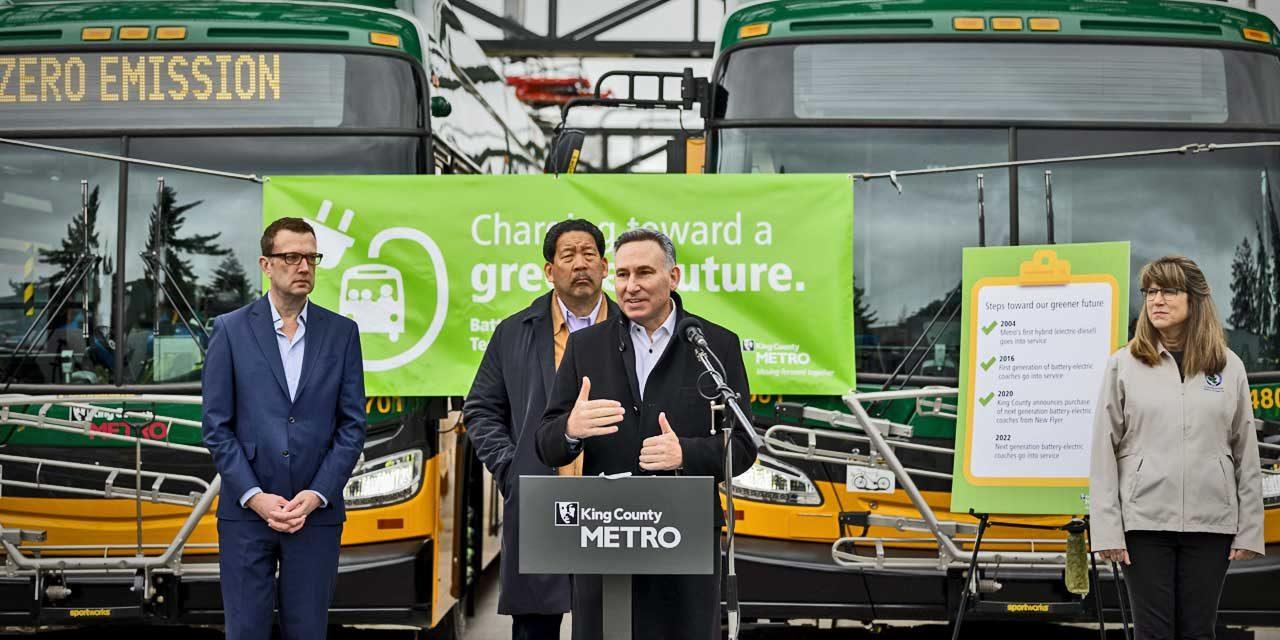 King County Metro this week opened a brand-new charging facility in Tukwila for its battery-electric bus fleet, a first step towards achieving its commitment to transition the fleet to zero-emission vehicles powered by renewable energy by 2035.

The state-of-the-art charging facility is located at Metro’s South Base in Tukwila (map below), “a city that has historically borne the brunt of the impact of air pollution,” according to the county.

King County Executive Dow Constantine and King County Metro celebrated the opening of the charging facility for Metro’s battery-electric fleet alongside the cities of Seattle and Tukwila, Seattle City Light, and representatives of New Flyer.

This opening also marks the start of service for the first next-generation coaches provided by New Flyer. The test base, which can charge up to nine coaches simultaneously, was created with an “interchangeable design” that utilizes charging infrastructure from multiple manufacturers, meaning all the major battery-electric buses will be able to successfully charge at any station. The facility will also be able to charge electric vehicles already in use by Metro and King County.

“As we charge up these new electric coaches at this state-of-the-art facility and send them out on the road, we’re reducing global carbon emissions while taking local air pollution out of the communities most impacted by climate change,” said Executive Constantine. “Developing buses to handle our unique conditions and scaling up our green infrastructure wouldn’t be possible without the innovative leadership of King County Metro and our partners in the transportation industry. That coordination has delivered the fleet that will drive Metro to the next green frontier.”

Metro is committed to having the first coaches serve routes in south King County, in transit-dependent communities that have been impacted by air pollution and climate change. The first of the New Flyer coaches will go into service on Metro’s Route 193, which will carry riders from Federal Way to Seattle’s First Hill this afternoon starting at 2:08 p.m.

“This is the type of exemplary collaboration and partnership we need to achieve our climate action goals for the region,” said Mayor Harrell. “We are committed to delivering clean, reliable, fast transit service to every Seattle resident. Working together, we can build a cleaner, greener future.”

Seattle City Light was a key partner in the project, providing direct support for the infrastructure concept design and build, testing, and commissioning to expedite the provision of the electrical service and make the most efficient use of the utility electric system. Through close coordination and best practices, Metro and City Light have been able to innovate the classic customer/utility relationship.